Alex Anteau is a master’s student in the University of Georgia’s Health and Medical Journalism program. He is currently assistant podcast editor at the Red & Black, a graduate assistant in the journalism department, and will be a reporting intern at the Athens Banner-Herald this summer. 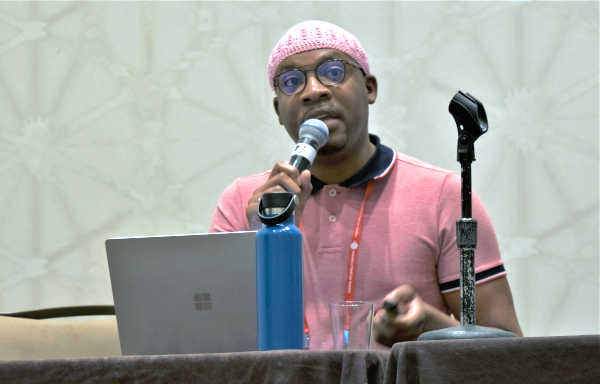 Those are just a few of the key takeaways from the  “Covering the LGBTQ+ communities: Anti-LGBTQ+ measures, COVID-19 and reporting insights” panel at Health Journalism 2022. The presentation also focused on health care inequities and discriminatory legislation like Florida’s “Don’t Say Gay” bill.

The panel — moderated by Naseem Miller, senior health editor for The Journalist’s Resource — also included Brad Sears, executive director and associate dean of the University of California, Los Angeles School of Law,  Daniel Downer, executive director of The Bros in Convo Initiative, Dallas Ducar, CEO of Transhealth Northampton, and Jen Christensen, a CNN producer and immediate past president of the National Association of LGBTQ Journalists.

Panelists urged reporters to get it right. “As health journalists, we have an opportunity to educate people in a really straightforward way,” said Christensen, “It’s exciting to think that you get a chance to talk about something a lot of your audience hasn’t heard about before.”

The available data on LGBTQ people is more nuanced than it was 20 years ago, and can now be broken down by race, geography, socioeconomic status and other factors, Sears explained.

Downer’s organization recently partnered with the Central Florida LGBTQ+ Relief Fund to document the experiences of LGBTQ+ people affected by the COVID-19 pandemic in central Florida. Their results shed light on how LGBTQ+ people of color and immigrants in rural and low income areas face unique challenges based on the intersection of different life experiences.

To help tell these stories, The Bros in Convo members put together a stock photo package, with images any newsroom can use to better represent LGBTQ+ people of color in the media.

Christensen stressed the importance of framing LGBTQ+ narratives in a way that doesn’t unintentionally harm marginalized groups. The terminology these communities use changes frequently, and staying up to date will help journalists tell their stories respectfully.

To avoid pitfalls, Christensen recommended Trans Journalism Association’s style guide for covering the transgender community, and the NLGJA’s style guide for writing about the LGBTQ+ community as a whole, available in both English and Spanish.

Before the panel, Ducar posted a message on Twitter asking trans people what advice they would give to journalists.

First and foremost, “there are not both sides to this debate,” Ducar said. “That creates a power imbalance against transgender individuals.”

There isn’t anything intrinsic to being transgender that causes this disparity, but rather how the system treats these individuals, Ducar said. They pointed out exclusionary practices, like the Diagnostic and Statistical Manual of Mental Disorders, which pathologizes gender dysphoria, and TSA checkpoints, that flag genitalia that doesn’t match a person’s outward appearance (people flagged are typically subject to public pat-downs and hostility from TSA agents).

Ducar recommended practicing trauma-informed reporting when speaking to trans sources. She also advised to not separate gender-affirming care from the rest of health care, to not frame gender affirming care as a culture war issue and to speak with a variety of trans people.

“This matters because we live in a society where many still believe to this day that LGBTQ people in general are invisible or not worthy of rights,” Ducar said, emphasizing that trans and gender diverse people of color are at an even higher risk of discrimination.

For more information about this this topic, check out these resources.

Alex Anteau is a master’s student in the University of Georgia’s Health and Medical Journalism program. He is currently assistant podcast editor at the Red & Black, a graduate assistant in the journalism department, and will be a reporting intern at the Athens Banner-Herald this summer.

5 Steps to Calm Your Worried Mind

The Dangers of Nurse Visits – The Health Care Blog