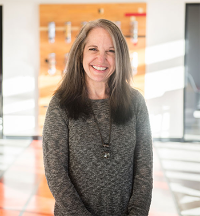 We are all guilty of ageism, even those of us who report on or study aging for a living. It’s everywhere — in advertising, movies, the workplace, health care settings, and family and social relationships. However, until we’re aware and willing to acknowledge age bias, we can’t overcome it as a society.

That’s why I was so eager to read Ageism Unmasked by Tracey Gendron, Ph.D., chair of the Virginia Commonwealth University department of gerontology and executive director of the Virginia Center on Aging. This well-researched and written book explores our exposure to the “old is bad, young is good” trope from childhood.

Gendron guides readers on how to recognize our implicit and explicit biases and reframes aging as a positive, rather than a negative experience. She also discusses how we can treat everyone more considerately, regardless of age.

In this Q&A, Gendron shares what journalists should keep in mind when reporting on aging concerns. This conversation was edited for brevity and clarity.

What do you mean when you say, “ageism is our prejudice against our future selves?”

Everybody thinks ageism is about older people. We are all aging. Not just in our later years but throughout our lifespan. We fail to see that we are not only setting ourselves up for discriminating against our future selves, but we’re impacting our health in a negative way. The powerful connection people need to make is, we’re all elders in training. When you discriminate against someone based on their older age, you’re setting yourself up for that same level of discrimination.

Why does ageism seem much more prevalent in Western cultures than in other societies?

That’s not exactly true. If you go to the literature now, you’ll see that ageism is everywhere. It is in all cultures, all continents, and all countries. A lot of that has to do with the separation of families because we don’t live in intergenerational communities anymore. Maybe not very indigenous cultures and societies, but for the most part, kids move away. They don’t live where their parents did. And so, they institutionalize older people and see caregiving as a burden because that’s how we talk about it. You see a rise in ageism everywhere, but part of it is because we don’t recognize the generational rhetoric as ageism.

How did we get to a point where being older is a bad thing? Once upon a time, we used to honor and respect elders.

Ageism is everywhere, so much so that we forget to acknowledge it. We forget to see it. I wrote this book to try and figure out the “how we got here” part because it’s a long and complicated story. Ageism is complicated because aging is complicated. Aging is not just one thing. And I think a lot of people have trouble holding two opposing things in their heads at the same time. Aging is about decline. Aging is also about growth.

The structures of our societies have continued to be built brick by brick to make it [aging] more invisible. The fact that we normally segregate older people should be eye-opening enough to be like, why is that? Why do we build these communities and put old people there?

Older people want to be in the community. They want to have a place to belong. I think ageism is the driver of social isolation. When you don’t have a place where you feel you’re valued, it’s easy to be isolated.

You mention in the book that if we substitute race or religion in some of the ways we talk about older people, it wouldn’t be acceptable. Can you expand on that?

The words old and young often come with value judgments. So even if you say “anti-aging is an industry,” if you were to substitute something else in that place, anti-gender, anti-race, anti-whatever, you’d find it offensive. I encourage people to do that.

It’s often frustrating for me as a journalist when I see demographic breakdowns of 65 and older — like all older people are one big homogenous group. How can we push back against that because there is a wide range of abilities and challenges among this population?

You can put two people in the same situation at the same age and they’re going to interpret that situation differently. Age alone is not a good predictor of health or anything else. But, we have yet to figure out a better way to say it or classify it. It’s a tricky question.

How can journalists be more aware of language or biases when writing about this demographic?

Take a step back and see if you are contributing to the language crisis. For example, instead of the silver tsunami, equating it to a natural disaster, how about flipping it and looking at the opportunities instead of a rich, diverse group of older people who bring a lot of lived experiences?

We are all going to be biased; we can’t help it. Our brains work that way. What you’re talking about is so relevant because we have to bring in and synthesize all of this information.

As reporters, if you’re looking for a story or an angle, stop and think about the broad generalizations you’re making about entire groups of people. If we just did that and stopped talking about the aging population as this homogenous group of people and instead started to reflect the rich diversity and recognize the heterogeneity that’s within it, that one step would be critical. Stop thinking of aging as old and start thinking of aging as developmental. Stop thinking of older people like this big monolithic, homogeneous group. Start to question your own biases.

We also need to stop equating successful aging with physical and cognitive ability. Eventually, we’re all going to experience a decline. We are all going to die. We are mortal beings. So, does that mean at some point, each of us is unsuccessful in our aging? Does that mean that when we die, it’s a failure of aging? Can’t we accept that we all have different paths that does include changes to the way that we think, the way we feel and the way our bodies work? Many people feel left out of this definition of success. And yet they can find so much joy, meaning and purpose in their life

How Pharyngeal Suction Can Save Your Patient

What to Do With Old Nursing School Textbooks? – FRESHRN

We Are All East Baltimore