What Are the Most Common Causes of Upper Airway Obstruction? 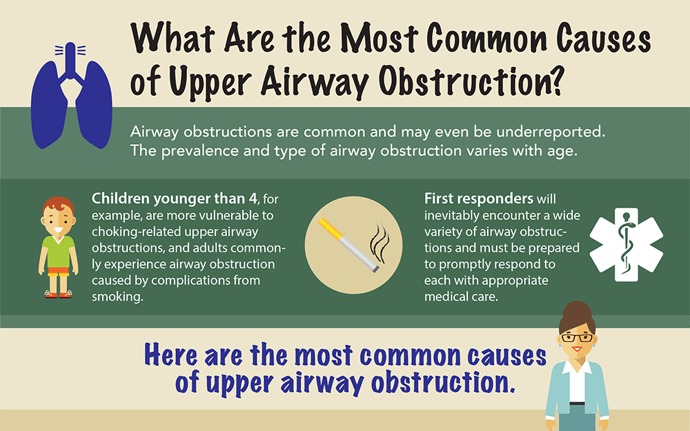 A relaxed tongue is the most common cause of upper airway obstruction in patients who are unconscious or who have suffered spinal cord or other neurological injuries. The tongue may relax into the airway, causing an obstruction. In some cases, other injuries complicate this phenomenon. For example, a patient who is unconscious following a blow to the head may also have suffered upper airway trauma, causing both the tongue and the trauma to block the airway.

Swelling can obstruct the airway in a matter of seconds. Though infections can cause severe upper airway swelling, the most common cause is anaphylaxis. Anyone with an allergy can have an anaphylactic reaction, even if they have been previously exposed to the allergen without such an extreme reaction. More than 32 million Americans have food allergies, putting millions at risk of swelling-related airway obstructions. Moreover, the prevalence of food allergies is increasing. There’s been a 21% increase in peanut allergies in children since 2010.

Asthma may also cause upper airway swelling. In most cases, asthma is well-managed with a rescue inhaler, but severe asthmatic reactions can be fatal. About 26 million Americans have asthma. Worldwide, about 180,000 people each year die from asthma, but prompt medical care and diligent airway management has greatly reduced mortality in the U.S.

Traumatic injuries can directly obstruct the airway, such as when a gunshot or knife wound collapses portions of the airway. Trauma can also cause continuous bleeding or vomiting that obstructs the airway, making airway management difficult and increasing the risk of aspiration pneumonia. In the latter scenario, continuous suction via the SALAD technique can clear the airway and lower mortality risk.

Proper management of upper airway obstruction is key to stabilizing the patient for transport and potentially saving their life. Portable suction ensures you can immediately attend to the patient. In the case of unstable patients for whom movement may be risky, such as spinal cord injury survivors, this can improve outcomes. For help selecting the right portable emergency suction device for your agency, download our free guide, The Ultimate Guide to Purchasing a Portable Emergency Suction Device.

Editor’s Note: This blog was originally published in July 2019. It has been re-published with additional up-to-date content.

Best Guide How to Become a Director of Nursing in 2022

Rural hospitals are closing, and Congress needs to step in

Tobacco Content Exposure on Social Media Tied to Actual Use

How to Sleep on Your Side With a CPAP