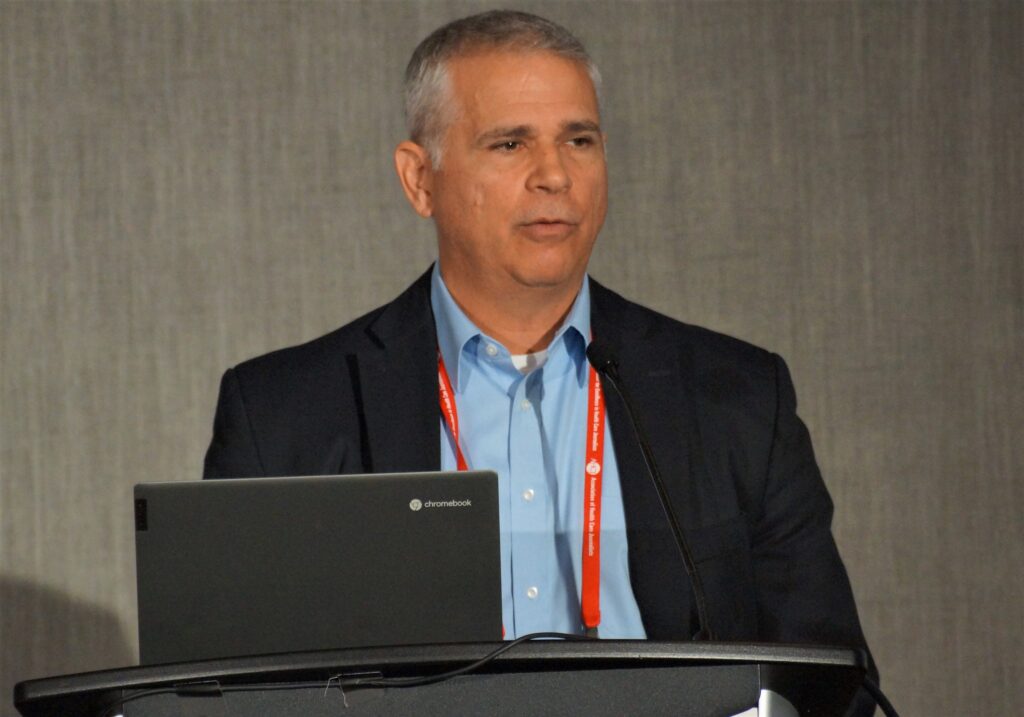 Thomas R. Simon, Ph.D., associate director of the CDC’s Division of Violence Prevention, addresses attendees during the “Everything you think you know about guns is wrong: Myths, facts and where to find the best research & data” session. (Photo by Erica Tricarico)

One of the most challenging aspects of writing about gun violence is finding good data. The CDC has reliable statistics on gun deaths, including accidents, suicides and homicides, but it’s historically been more difficult to find data on gun injuries or more detailed epidemiology.

At the Reporting on Violence as a Public Health Issue: An AHCJ Summit last month, two speakers offered a wealth of resources for gun violence data. The first was Thomas Simon, associate director of the CDC’s Division of Violence Prevention. The other was John Roman, a senior fellow in the Economics, Justice and Society Group at NORC/University of Chicago.

Simon referenced the National Vital Statistics System (NVSS), available through CDC’s WONDER Database, as the oldest system available for quantitative birth and death data. This system provides data published in MMWR’s such as the one showing that the rate of firearm homicides rose nearly 35% between 2019 and 2020.

In addition to straight numbers on deaths, journalists can filter the data to compare different years, geographical regions, and the ages, races and ethnicities of victims. This data can be combined to look at social determinants of health, Simon said. For example, the same MMWR showed that “in 2020, counties with the highest poverty levels had firearm homicide rates that were about four and a half times as high as counties with the lowest poverty levels,” he said.

Another CDC data source is the Web-based Injury Statistics Query and Reporting System (WISQRS, pronounced “whiskers”). WISQRS has Fatal Injury and Violence Data and Nonfatal Injury Data. This database system can generate data visualizations to see trends over time, including the cost of firearm injuries, the cost of firearm homicides and suicides, and tables showing leading causes of death for different demographics.

The NVSS doesn’t have data on the circumstances of homicides since it’s based on death certificates, but the National Violent Death Reporting System (NVDRS), available through WISQRS, merges information from death certificates with information from law enforcement, coroners, and medical examiners from 48 states, Washington D.C. and Puerto Rico. It includes more than 600 unique data elements, including the make, model and type of firearm used in each incident and the situation leading to the violence. For example, the most common circumstance of homicide for women is intimate partner violence, accounting for 45% of homicides. For males, it’s an argument or conflict, accounting for 36% of male homicides.

A separate CDC data source that journalists can use to look at gun injuries is the National Syndromic Surveillance Program (NSSP), which covers different types of illnesses and injuries, including a section on firearm injuries that the CDC is actively working to expand. NSSP includes real-time data-sharing from emergency departments across the country through the Firearm Surveillance Through Emergency Rooms (FASTER) source, which now consists of 10 state health departments.

The final report, an Expert Panel on Firearms Data Infrastructure, concluded that “the current firearms data environment is disordered and highly segmented and too limited to answer many critical research questions.” It can be accessed in three parts:

Together, these resources offer journalists multiple sources for understanding gun violence in the U.S. even as public, private and research institutions work to increase the availability and detail of data for the future.

How to Get More REM Sleep

When reporting on ACA open enrollment, explain the ‘family-glitch’ fix