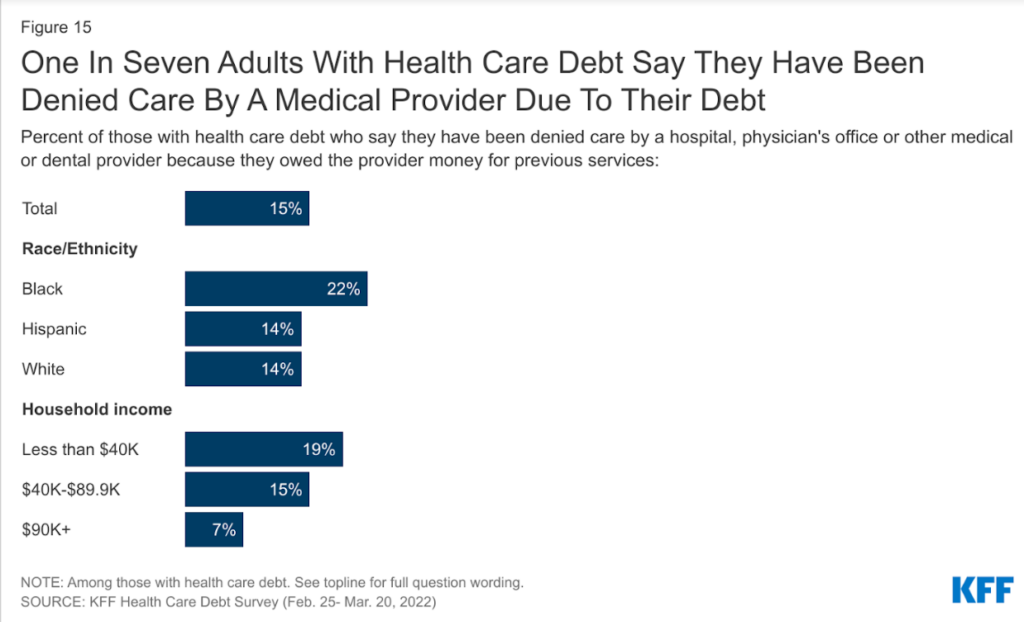 A survey from KFF shows one in seven adults in the United States who have health care debt say a medical provider has denied them care due to their debt. Source: KFF Health Care Debt Survey (Feb. 25-Mar. 20, 2022). https://www.kff.org/report-section/kff-health-care-debt-survey-main-findings/ accessed dec. 23, 2022.

Recent news shows the need for health care journalists to investigate the aggressive measures hospitals use when patients can’t pay their medical bills.

Over 18 months, Levey and KHN reporter Aneri Pattani have produced more than 30 articles for a series called Diagnosis: Debt, a multimedia investigative journalism reporting partnership between KHN and NPR on the scale, effects and causes of medical debt in America. For the project, KFF researchers contributed the findings from a public opinion survey, “Health Care Debt in the U.S.: The Broad Consequences of Medical and Dental Bills.”

In the article on Dec. 21, “Investigation: Many U.S. hospitals sue patients for debts or threaten their credit,” Levey reported that all types of hospitals in all regions of the country including public university health systems, academic medical centers, small community hospitals, for-profit hospital chains and nonprofit Catholic systems use aggressive debt-collection practices.

Among the reasons to report on how hospitals pursue patients for medical debt, three reasons stand out.

In June, Levey wrote about the key takeaways from the project, including the fact that among the more than 100 million people who have debt from medical or dental care, much of it is hidden in credit card balances, payment plans to hospitals and other medical providers, and through loans patients take out from friends and family.

Also, debt and illness are linked, according to a study from the Urban Institute, “Which County Characteristics Predict Medical Debt?” In that study, researchers showed that county-level data on the level of illness among residents were the strongest predictor of whether a community would have high medical debt.

“In the 100 U.S. counties with the highest levels of chronic disease, nearly a quarter of adults have medical debt on their credit records compared with fewer than 1 in 10 in the healthiest counties,” Levey wrote.

And patient debt is pervasive because, over the past two decades, health insurers have shifted costs onto patients through high deductible health plans while at the same time the medical industry has raised the prices of drugs, procedures and treatments, Levey added.

For an example of how reporting on medical debt can bring important results, see the article Molly Castle Work, an investigative reporter for the Post-Bulletin in Rochester, Minn., wrote on Nov. 22. In that article, “They could have qualified for charity care. But Mayo Clinic sued them,” Work explained that 14 of the 20 patients she interviewed after the Mayo Clinic sued them for unpaid bills could have qualified for charity care based on the information the patients provided during interviews with Work. “Yet all but one were forced to pay their bills in full after they were sued, often through wage garnishment,” she wrote. “Most had no idea charity care was an option.”

On Dec. 15, Work wrote a follow-up article about how Minnesota Attorney General Keith Ellison was looking into Mayo Clinic’s billing and collection practices.

“Mayo’s apparent aggressive bill-collection conduct that the Post-Bulletin reported is alarming,” said John Stiles, spokesperson for the AG’s office. “We take that very seriously and have asked Mayo for more information.”

Ginger Plumbo, a Mayo Clinic spokesperson, responded by email saying the clinic welcomed “the opportunity to provide an accurate and complete picture of our billing and collection practices. We are confident that our response will demonstrate that financial assistance is an important part of Mayo Clinic’s relationship with patients and is shared with them at points before, during and after care is provided.”

For another example of how reporting on medical debt gets results, see this article, “Hospital System to Refund Poor Patients Who Were Entitled to Free Care,” by Jessica Silver-Greenberg and Katie Thomas at The New York Times. We covered their work on charity care in an article on this blog in September, “Why hospital charity care requires more intensive coverage.”

Why using the term ‘immunity debt’ is problematic for reporters